The HOTTEST Show to Hit Town!

"THIS is the Only show of its kind in Australia that enables you to experience the Iconic sounds and styles that defined a generation and shaped country and rock 'n' roll music forever!

Many shows will entertain you…Ultimate Country and Rock ‘n’ roll will MOVE you!"

WORLD-class superstar entertainment will descend on Perth and rock audiences in a one-night only spectacular. With its first huge sold out show at Mandurah Theatre in September, The Ultimate Country and Rock ‘n’ roll experience is currently touring WA and is the top of the heap in musical stage shows, as well as Australia’s greatest live salute production!

Packed with all-star talent and powerhouse vocals from award-winning entertainer Gary Anderson and his fantastic cast of singers, and dancers. The smash hit extravaganza is a truly grand experience, bursting with colour, class, an array of entertainment, audience participation and AMAZING renditions of your favourite songs.

International entertainer Gary Anderson has thrilled audiences in 10 countries on 3 continents and has earned numerous accolades. Anderson’s award-winning full-scale productions feature an ensemble cast of singers and dancers, with top musicians featuring the greatest collection of songs ever assembled from yesterday and today. Along with the exceptional cast, you will experience 4 great entertainers in one magic night!

Already currently touring WA, this is a must-see show, and an array of magnificent entertainment for guests of all ages.

- “There are a lot of country rock ‘n’ roll acts around, but Gary is at the Top… Don’t miss it!”
CROWN THEATRE AUSTRALIA

- “This electrifying performance will send shivers down your spine – Truly remarkable!”
THE STAGE 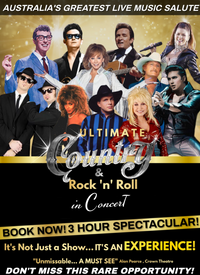 All Ticket purchases are processed through and Secured by your choice of either PayPal or Stripe.